Most modern software project management tools promote the idea of utilizing a centralized repository environment to store and provide software dependencies on an as needed basis.  An example of this is the popular Maven central repository (http://repo1.maven.org/maven/). Open to all and hosted by the Apache software foundation, Maven central is the default location where one would pull dependencies (i.e. software artifacts) from when creating a Maven based software project.  For many organizations looking to utilize Maven as a tool for managing software projects a remotely located, public “open to all” software repository is problematic in terms of a security risk as well as Internet bandwidth utilization.  The alternative approach is for the organization to host its own repository.  Recently I went through the process of standing up a Sonatype Nexus OSS Repository for an organization. This blog entry documents an overview of the installation, configuration and management tips, as well as information pertaining to the development environments that interface with the repository.

By default Nexus will install it own instance of Jetty and run on port 8081. If desired there is an option to install Nexus into a  different J2EE container.  To install Nexus unzip/untar to the location where Nexus will be run out of.  A recommendation (although NOT required) from the Nexus Installation guide is to define a “NEXUS_HOME” System variable pertaining to this location.

To start the server run the following command

The following repository setup is what we used as an initial implementation of the organizations Nexus setup, this is a learning process so its usage may be a little immature. One will note the lack of release and snapshot repositories. Once the CI environment and Repository have been made to work together the expectation is to reintroduce the release/snapshot concept. 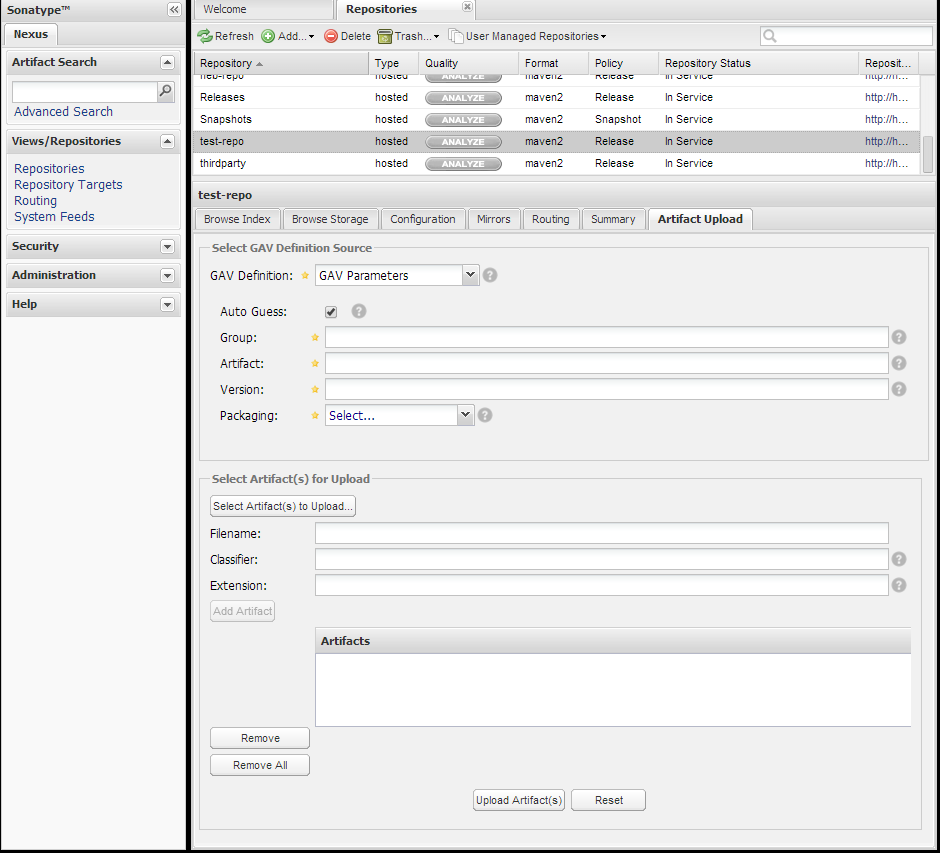 In this example the “nexus-repo” reference would need to exist as a server entry in maven’s settings.xml file.  Additionally the deploy goal can be implemented via a project pom.xml, see the examples later in this blog entry for how to setup Maven to work the deploy goal.

Although not a recommended long term solution, manually copying folders and files into the location where the repository files are stored on the server is an option. Testing found, if artifacts are copied in the proper format Nexus will update its own index’s. This allows for an individual to build a repository on another machine and copy it into the location.  A typical Local Maven repository (commonly located at  %WINDOWS_USER %/.m2/repository) and the content of another Nexus Repository have been tested to work for the copy.

Devising a strategy to utilize Nexus’s proxy capabilities to fetch publicly available libraries is also an option. For individuals behind a corporate proxy, proxy settings can be configured under the Administration->Server section of the Nexus Admin screen. 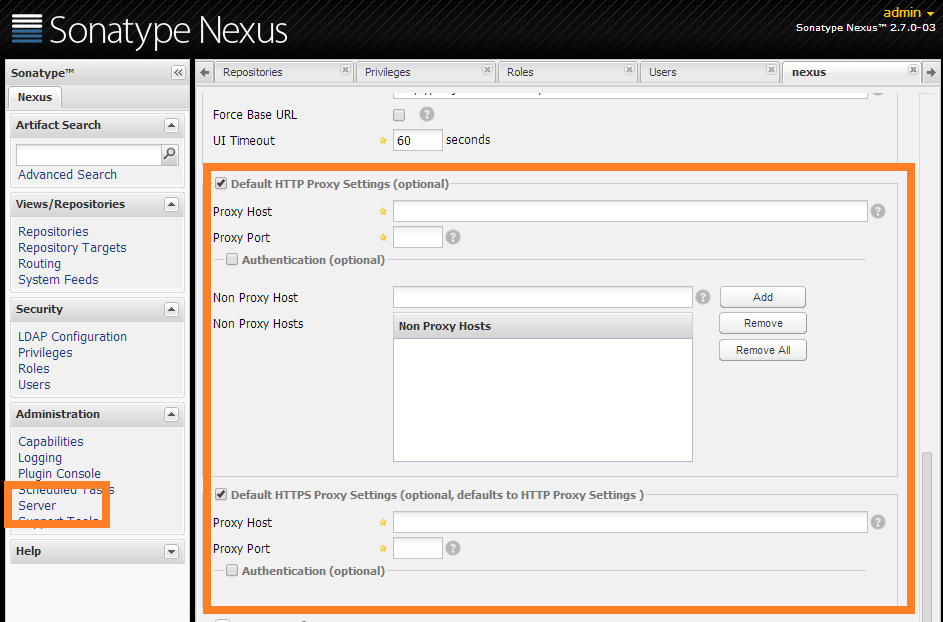 Connecting to the Nexus Repository can be implemented in a number of ways.  Specific Repositories could be referenced in a unique project’s pom.xml file and/or options could be configured on the individual’s local Maven installation in their settings.xml file. This section describes the various settings and recommended approaches to connecting from a developer machine to a Nexus repository.

Add a mirror entry under the mirrors node of settings.xml to utilize the “central” repository located at http://localhost:8081/nexus/content/repositories/central/

Configuring Maven to authenticate to Nexus Repository for Deployment goal

In order to deploy artifacts to a Nexus Repository the local Maven installation must be able to provide the proper details in order to authenticate with the server. Recommended way to do this is to add a server entry under the servers section in settings.xml.

Once this is configured, Mavens deploy goal can reference this via the command line argument to deploy an artifact to the repository, see the example from document.

In a project pom.xml file the “distributionManagement” XML entry is used references the server entry in settings.xml. When Maven’s deploy goal is called it will utilize these settings.

Although not recommended in the specific case I am working on there will most likely be times when an individual is behind a corporate proxy server and requires access to pull artifacts from publicly available repositories.  A use case for this may be during the start of a new project when the correct libraries for the task are being evaluated. To configure Maven to utilize a corporate network proxy servers edit settings.xml in the following manner.

Add the following entry within the pom.xm of a project to utilize a unique repository for pulling artifacts.